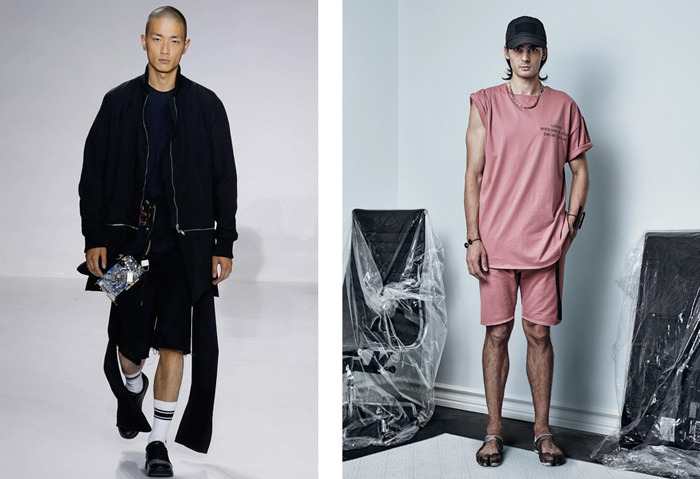 Given the artistinal construction of his garments, it’s perhaps unsurprising that prior to working with Karl Lagerfeld and Helmut Lang, the German-born designer Siki Im was formally trained in architecture. Since launching on his own in 2009, Im has shown himself to be of dual minds, as literally reflected in his brand, which encompasses two distinct ventures: his eponymous main line, known for its fusion of bold cuts, minimal palettes and modern luxury fabrics; and DEN IM, his more laidback extension line, through which he produces what might be described as “cerebral casualwear.” Between the two, Im draws inspiration from a eclectic range of sources—recent collections have referenced everything from the Arab Spring and Wall Street collapse to Nosferatu and The Singularity—while consistently offering designs that stand out for their considered (and welcomely skewed) take on volume, structure and tailoring.


Though your brand is known for menswear, you’ve said elsewhere that you consider your designs to be “unisex,” a label you see as distinct from “androgynous.” Can you explain the difference?

For me, “androgynous” is when there is no clear distinction between a man and a woman, whereas I think of “unisex” as wearing each other’s clothes but still defining one’s own gender with empowerment.

Still, in showing as a menswear label, do you feel obligated to promote a more “masculine” presentation? What does that term mean to you as a designer?

The subject of sex is very personal—each designer has different contexts and associations, and each definition is valid. For me, it’s always important to question the norm, to question what and who defines these concepts, including masculinity. For example, I included skirts in my first four collections, and I think the presentation was still very masculine. This wasn’t anything new—labels like Comme and Gautier had done it before—but it was proposed here in a different context. I think we as humans like to label things for easier communication (and perhaps out of laziness), but the world is changing fast. It’s not so black and white anymore, and fashion should reflect that.

Well, to that end, you’ve also described past collections as “Classic—as in timeless, but also genderless.”

Right. Things are classic because they resist definition. A Mies Van de Rohe chair from 1930 remains timeless and relevant, just like your Helmut Lang blazer from 1999. Neither tells you that you need to be Republican, Democrat, Asian, white, black, male, female, gay, straight, Christian or Muslim. They’re always modern. I want the same for my clothes. Your most recent collections have played a lot with silhouettes, with asymmetric cuts, drop-crotch bottoms, and other forms that border on the sculptural. From appearances, they’d seem to accommodate a range of body types. In sketching a given piece, do you have a particular figure in mind, gendered or otherwise? Or are you consciously embracing mutable fittings?

The body, gravity, and other elements of reality are less respected in the fashion world—we tend to dream and create images of something fantastic, almost supernatural. But the beauty of reality is that we all vary, so it’s important that different people can wear my clothing and take it into a new context, whatever their size or gender.

To date, you’ve exclusively cast cis men to model your clothing. How do you think your garments would translate if worn by models of other gender identities? Is that idea of any interest?

I’d love that! Our casting thus far has reflected our customer base, which is mainly male. But as I said, each piece could—and should—be worn by anyone. As a menswear designer, how do you respond to the suggestion that gender’s become an obsolete means of classifying garments? In your opinion, can clearly defined notions of gender still retain a useful function in fashion?

It can still be useful. In designing menswear, I have to recognize that the male body is often different from the female, and that people don’t always want to wear oversize, androgynous clothes. It really just depends on what kind of garments you make.

Speaking more broadly, do you think fashion is a viable arena for meaningful discussions of gender? Can fashion effect social change, or does it simply reflect it?

I believe that fashion is culture and zeitgeist. It questions, takes from, and gives answers back to society—as it always has, and always should. The vocation of a creative intellectual is to inspire and challenge others, which in turn leads to change and progress.