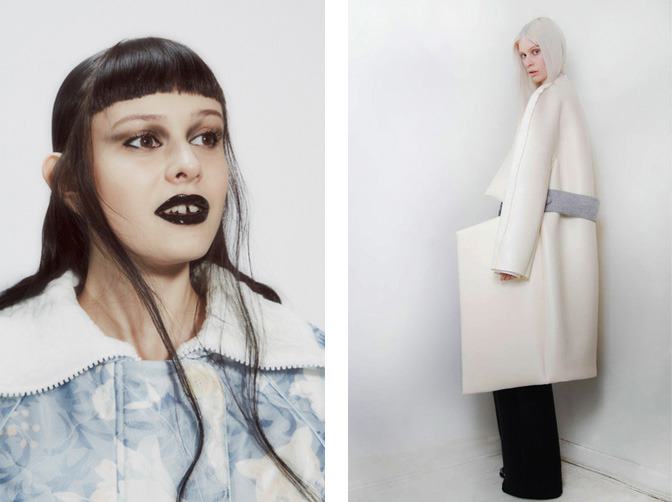 LRS Studio finds its footing in the stranger gaps between abstraction and accessibility. Led by head designer Raul Solis, the label’s “post-minimal” aesthetic consistently integrates what might otherwise seem contradictory elements: organic fabrics offset by high-sheen synthetics, vintage motifs reimagined in progressive cuts and tactile materials. Each of the label’s collections is centered on a specific but evocative theme: for F/W ’16, for instance, Solis filtered the effects of insomnia through the lens of New Romanticism, its runway presentation low-lit in blue to conjure the after-hours club of ones dreams (or nightmares). Though outwardly bold, Solis’ textural interplay, forgiving figures and meticulous craftsmanship ensures that even at their most conceptual, the clothing never sacrifices pure tactile reward.


LRS identifies firmly as a womenswear label. In designing women’s attire, is it important that one have a clearly defined sense of what’s “feminine”? How have you defined that term in your own work?

I’m not sure that just because you’re making womenswear, you have to define it so clearly. Femininity can mean many different things, depending on the person. As a designer, I think what’s most important is that you have a sense of who your customers are. In my case, I dress my women in feminine pieces, but I still love distorted traditions, playing with the codes of femininity and sexuality by altering the way we see them.

To that end, have there been any particular traditional cues for women’s style you’ve enjoyed working with (or against)?

I’m constantly experimenting with different “feminine” symbols—skirts, bustiers, off-the-shoulder silhouettes, florals—but I also play with masculine codes as well. I just try to merge a variety of references and, hopefully, make something that seems new to the eye.

Among other things, LRS has distinguished itself through its approach to materials—you've demonstrated a particular talent for integrating unconventional textures while making familiar fabrics seem fresh.

Thank you! My overall goal is to show you an everyday material in a new light, to make you think of what you’re looking at. Last fall, for example, I made a raincoat out of cobalt blue tarp—a material that, in gesture, is typically masculine. But while working with the tarp, I never felt like it made any of my girls look “butch.” The coat was still feminine, just a little more durable. Whatever materials you’re working with, I think it all depends on the personality of who’s wearing the garment. I’m a huge fan of individuality and having your own voice. The clothes should not speak for you—we should be able to find the garments that help us say what we want to say. You’ve said elsewhere that you make a conscious effort to avoid making your work “sexy.” What does that word mean to you? Why’s it worth avoiding?

“Sexy” has always been a word that scares me. I believe more in subtle seduction. I love the idea of hidden messages in order to romance. Somehow, being overtly “sexy” seems like a cheap escape, like not actually putting in the work to find interesting ways to seduce. It’s the same in fashion as it is between people.

Past collections have taken inspiration from a number of sub-cultures—most notably, specific factions of the club scene. What's continued to draw you there? Is it a visual connection? Social? Both?

Both. More than anything, it has to do with a sense of allowance and inclusivity. When we make an alliance with a particular club scene, it’s mainly because we’re trying to find people that understand us, that allow us to be ourselves without any judgment. That is all we’re working for. It’s this idea of dressing in an outfit that is normally not considered politically correct, but which we could all find somehow relatable.

So do you feel like you’re designing for a particular demographic or community? Who do you see as the “LRS woman”?

I design for people that have a sense of individuality. I love intelligent women that are working on building their characters. Women that are not afraid of some attention, but aren’t running around looking for it. Someone that is not afraid of obstacles or others’ opinions. A woman that appreciates quality and understands thought processes.

That seems to translate fairly directly in your casting selections.

Yes. I cast on character bases—I love to have a mixture of body types and features. This is the world we live in: we are all different and beautiful. The idea of all models looking alike is so old to me. I’m more interested in the characters of the models, their gestures, their lives. This approach works for my clothing because I don’t design with an overarching theme—I design from an abundance of references. It’s the same way I cast.

Looking back to what you said a moment ago about defining "femininity," I wonder if you've applied a similar lens towards casting?

Actually, we cast a born-male model last season (Garason), but not because of his gender, or because he looked “sexually fluid.” We cast him because of his energy—he’s so comfortable being himself, so unapologetic. It really had nothing to do with his sexuality: he just had the right personality to carry the LRS look we put him in. 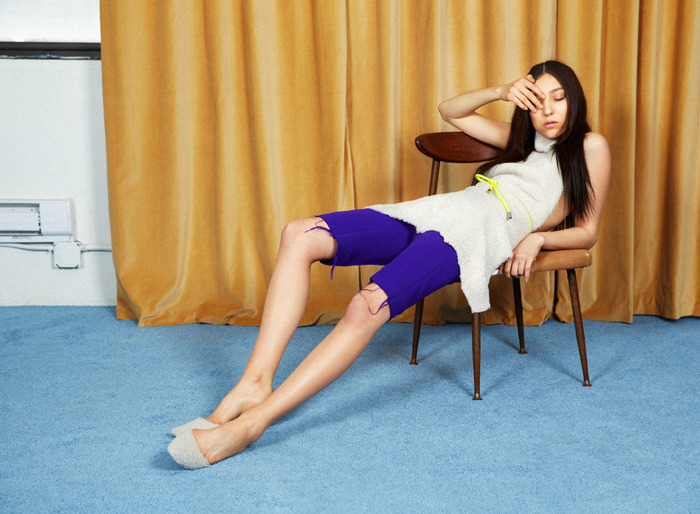 Obviously, gender fluidity has been a prominent topic of conversation in recent years, both in and beyond fashion circles. What’s your impression: passing trend or the new norm?

I’m torn about this. Men have been dressing in women’s clothing for centuries. It’s such an old topic. So I don’t understand why it’s been such a topic of conversation for designers recently—but I do see how it could remain an important topic for those people who still live in fear of doing it.

Speaking more broadly, what (if anything) makes fashion a viable venue for meaningful discussions of gender? In terms of effect, can fashion generate social change, or does it simply reflect it?

I believe it reflects it. Fashion inspires, certainly, but human circumstances make the changes.