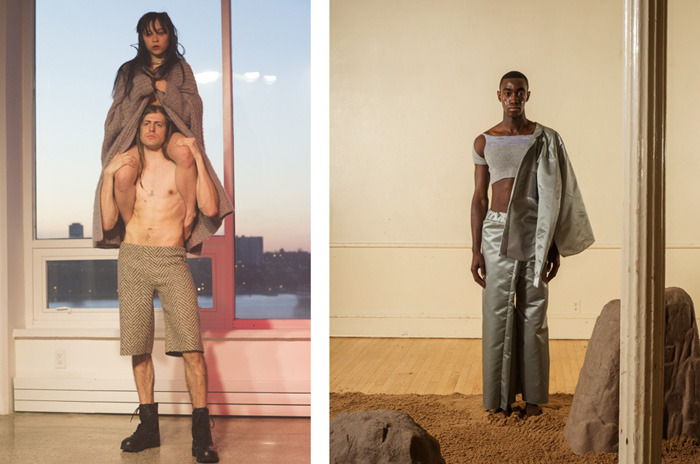 Having met while interning for Eckhaus Latta, Esther Gauntlett and Jenny Cheng (the label’s third founding member, David Moses, has since stepped down) launched their namesake brand in 2015, immediately distinguishing themselves through their cavalier cuts and consistently surprising presentations. Directly informed by the personal, social and financial stressors which, for many, define coming of age in New York, the duo’s aesthetic is aggressively democratic, almost deconstructive in design: strategic gaps, treated (but touchable) fabrics, textured layers and a soft, insistent androgyny. Palpable throughout is a nervous, agitated energy offset by an underlying insistence on comfort.


It seems like for many labels, “gender neutral” design essentially translates as a denial of the body: subdued palettes, overly forgiving silhouettes, non-suggestive cuts—strategies aimed at desexualizing both the clothing and the wearer. MGC’s approach has been markedly (and welcomely) different: your clothes are often quite revealing, with bare midriffs, freed nipples, exaggerated plunges and strategic gaps, all of which emphasize the body of the person wearing it, regardless of gender. The garments aren’t sexed, per se, but they can still be sexy.

Definitely. We really appreciate the body and don’t shy away from revealing it, although we hope to do so in some sort of democratizing way. We’ll reveal a shoulder or midriff, or a gap on a hip, and treat it with the same reverence as a displayed crotch, ass or nipples. Sensuality is a really important part of our work—although, as you said, it’s not something that depends specifically upon gender. Revealing and concealing unexpected parts of anyone’s body is interesting to us, regardless of the gender they identify with.

That much seems apparent in your casting and staging. But in terms of the cuts themselves, are you consciously eschewing gender codes?

Honestly, we don’t think about it that much. It’s never been a considered part of our aesthetic; it’s not something we discuss. We all wear both men’s and women’s clothes, and have designed men’s and women’s clothes, and don’t really think much more of it. We think that most clothes are already “gender flexible,” regardless of labels, and it’s the same with the pieces we make. If you look at each collection, there are always some pretty conventional silhouettes in there. Most of it’s really not that unusual in regards to fit or construction. For us, it’s always been more about creating some sort of fictional wardrobe, imagining what we would wear when we were feeling certain things, or what the people we aspired to be would wear.

It's interesting to hear that, considering how regularly your label’s mentioned in relation to the “gender fluid fashion” conversation. In terms of how you’ve been discussed and perceived, do you feel like being associated with the topic has been beneficial? Has it been a hindrance?

It's still a very relevant conversation—breaking down traditional stereotypes is immensely beneficial for the industry in a larger sense, and we’re happy to be part of that. But we also feel like by not focusing on it, the clothes can actually be a lot more flexible. So the association really hasn’t been helpful or a hindrance. It’s simply a non-issue. 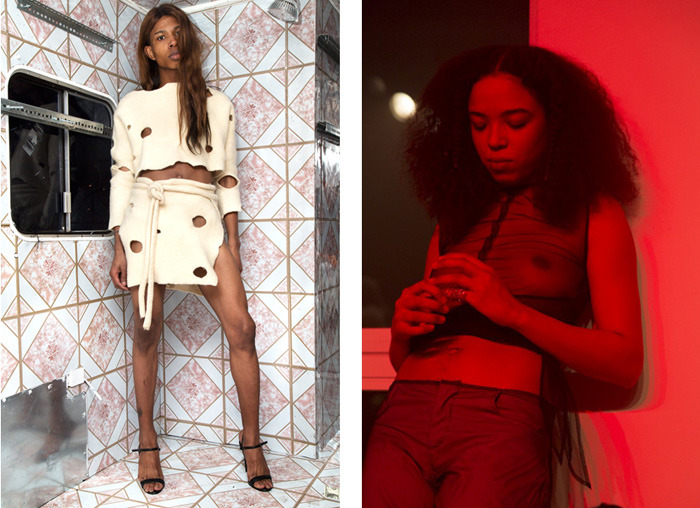 So how do the designs typically unfold? Do the initial ideas come from sketching? Conversations?

Ideas about the collection usually unfold out of pretty unrelated conversations, when we’re outside of the studio, talking about what’s happening in our lives at the moment. From those conversations, we'll generally write down a bunch of ideas and then sketch things out together. We don’t really sketch figures in the initial designs; we always fit the samples on both men and women, leave it as open as possible. A body doesn’t really go into the clothes until casting, where our models end up wearing clothes that resonate most with them as individuals.

You allow them to choose their own looks?

We always have loose ideas about who might wear what, but yes, casting and fitting usually comes down to the model’s personal preferences and fit. We just think people should wear clothes that they feel best in.

It sounds like a fairly hands-off approach, which I'd imagine is pretty exciting, in that it allows for a kind of intuitive, off-the-cuff tailoring. But I wonder, also, if there’s an element of surprise there, of gaining a new perception of your own designs by relinquishing a bit of control?

Absolutely! We try to remain pretty open with casting, but it’s definitely a two-way conversation. Working this way means that we're always caught off-guard in terms of things that work and don't work. We view the entire show as the “finished product,” so things only really seem complete when we figure out styling, casting, music, location. It feels like we often have little idea what the collection really looks like until the show unfolds, which is both exciting and terrifying. In both design and presentation, your collections are generally centered on fairly specific themes. At the end of the day, which do you guys tend to favor—the look or the feel? Does concept ever trump comfort?

The feel always informs the concept. We try to make the clothes look like they feel. For instance, last season started from a moment of post-show depression: a reluctance to work after a high of short-lived creative expression, missing a destructive work lifestyle and dwelling on mistakes made. The clothes reflected that. It was what you’d wear if you struggled to leave your house or a restricting headspace, but you were really trying to. We used needle felting and short rowed knits to make textiles that were matted, dirty, stretched out and lived in. But the work’s always about this sense of projecting feelings onto the clothes—the physical feel translates pretty literally from the concept.

This broader sense of anxiety seems to be an ongoing motif in your work, almost like a muse, but I’m particularly interested in this notion of a “destructive work lifestyle,” and the extent to which these stressors are inherent to the business itself. For example, the fashion calendar is demanding, unforgivingly paced. How has MGC coped with that?

Our label is really personal: we explore the everyday, specific (and maybe indulgent) emotions we obsess over or try to forget. These things are directly related to our industry and our location, and we try to be very candid about that. There are a lot of things that stress us out about making clothes, but actually, the fashion calendar isn't one of them. We choose what we want to be a part of—which, for us, is two shows a year. That rate of output suits us. We'd rather make our collections concise, even if that leaves us only a few ideas to explore per year. Recent changes to the fashion calendar are a little different, though. Currently, we get six months to make the clothes before they go into stores, which is great. Making everything available days after the show cuts a lot of smaller people out. Having that extra time gives us the chance to make some pieces in-house, without having to front production costs.

I was curious about that balance between in-house and factory. There’s a handmade vibe to a lot of the clothes that I find really appealing.

We make all the samples ourselves, and then production is mostly done in a factory in the garment district, with a few items made in-house. Making the samples ourselves is important, though. Things change pretty rapidly in the process of making the clothes, so we try to be as flexible as possible.

From what I’ve read, it seems like the label was established in fairly short order—organically, almost haphazardly. As time’s gone on, has your sense of what MGC “is” or “does” grown more specific? More expansive?

It was definitely an organic process, and probably not as considered as it should have been. But going into this naively made us braver and probably got us a little further than if we had approached it with caution. MGC’s never made a business plan or wrote a manifesto, but we've learned things along the way that strongly inform our practice. We really believe in manufacturing in New York, collaborating with people we respect and being open in terms of discussing things we struggle with, things we've learned and things that help our community. How would you define that community? Do you feel like your work speaks to a particular demographic?

It definitely reflects our immediate selves and what we’re feeling, which are probably pretty common emotions amongst young people in New York: you’re stressed, perhaps you’re partying too much, feeling tired, not having enough time, reluctant to “grow up,” craving some sort of domestic comfort, avoiding responsibility. But in terms of a particular community, it’s probably most reflected in our casting. There are models we’ve worked with for a long time, who are all people who really resonate with the clothes and the shows that we put on.

What about in terms of other designers? Do you feel a kinship with other brands, whether based in or outside of NYC?

New York has a pretty incredible fashion community at the moment; there's definitely a sense that we all started at a similar time and have shared advice along the way. But in terms of our shows, we work with our friends, people who are important to us and whose work we respect: Joseph Geagan for casting and the hair; our stylist Tess Herbert; Thomas McCarty, who has shot previous lookbooks and campaigns; Jason Lee, who does the music; and Harry Hughes, who filmed our last two shows. It's not necessarily a fashion community per se - these people aren't fashion people - but we think that makes things a little more dynamic.