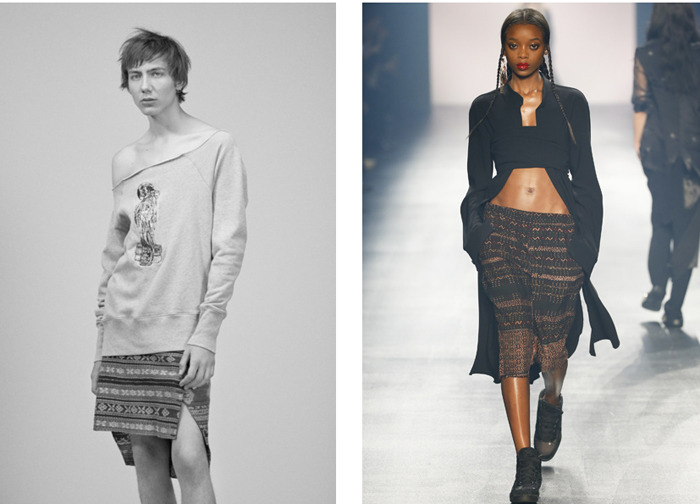 
From the outset, your brand’s been outspoken in promoting "gender-obsolescent wear," to borrow your own term. As you were initially developing Baja East, what made you want to adopt that aesthetic as a central tenet?

Scott: We officially launched our brand in October 2013, but we were planning everything at least a year before. As we were initially deciding what our aesthetic would be, we kept going back and forth. But after we’d made our first few samples, we would wear them around town, and guys would like them, but then so would our girlfriends. At that point, we just said, “Why should we have to make our brand specifically men’s or specifically women’s?” So when we eventually launched, we had 25 pieces in the collection, all part of our core foundation: this ambisexual approach to luxury.

I’m particularly interested in this notion of “ambisexuality.” What does that term mean to you? How is it distinct from, say, “gender fluid” or "androgynous"?

Scott: With “ambisexual,” it’s the idea that when guys wear the clothes, they look masculine and cool, and when girls wear them, they look feminine and sexy. I think anything you see on a guy can be worn by a girl, and many things you see on a woman can go back and forth—but clearly, we are not telling guys to wear silk dresses.

John: Right. It’s not about androgyny. It’s about letting people make it their own.

Maybe not silk dresses, but I love that you so prominently feature wrap skirts in your collections, which you show on male and female models alike. It’s become something of a trademark for you guys—largely, I think, because your presentation really demonstrates the skirt’s versatility. It’s surprising how easily it can be integrated into any number of looks.

Scott: I love wearing them. They look great and really go with anything. But at the same time, we do know that it has to have a vibe that translates to both guys and guys. We always have to look at it through that lens: “Is this still masculine enough to go on a guy?”

John: But there are always surprises. For instance, when we were creating our blush tie-dye tee. Blush isn’t necessarily a masculine color, but all of a sudden, you see Nick Young wearing it on Instagram—and meanwhile, you find out that more women are buying the blue than men. It was kind of a crazy thing: you think a color story is going to appeal to one specific gender more than the other, but you can never be sure what will happen. That’s part of why we’re doing this: to watch it all unfold, to see who is actually buying it and how they’re wearing it. 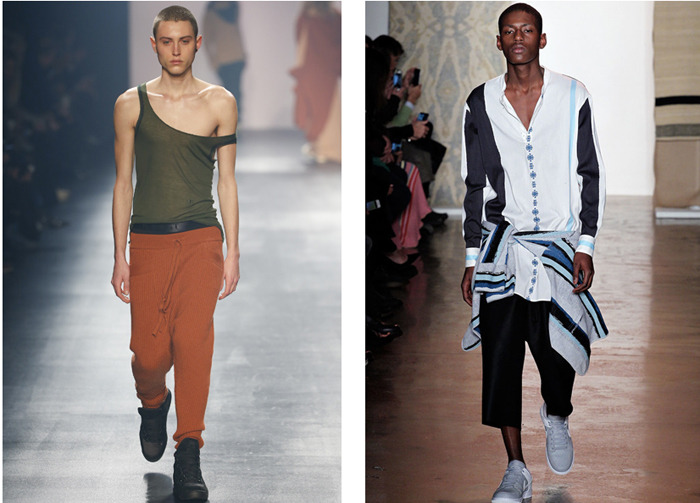 You guys have always had a distinct sensibility in your choice of materials. Obviously, as a luxe brand, a lot of it boils down to feel, to comfort. I wonder, though, if you’ve worked with any fabrics that in themselves particularly seemed to muddy the waters re: gender cues?

Scott: There was a recent editorial where we had these little knit boy shorts that we showed in cashmere with a cashmere bikini, and it was shot on a male model. Obviously, that’s something most guys probably aren’t running around in, but it looked great, and still plays on this idea of loose luxe: the right fabrication, the right feel. That’s very important to us, no matter what. It’s always about the feel of something—not only the garment, but how you wear it, how you interact with it, create it, and build it into your own style.

Who tends to stock your brand more—men’s or women’s stores? Do you apply different strategies in presenting the clothes to each consumer base?

Scott: It’s definitely more female-focused—about 90% of our business is women’s—but it’s still a combination of both. Compared to women’s, men’s is small for us. But where we do sell men’s, we sell very well. A lot of this has to do with our backgrounds. Before we started our brand, John and I both worked as sales directors at major women’s brands. So even in launching our own business, the majority of our contacts were women’s. And because we run the company ourselves—we do our own sales, our own press, all of this stuff—we’ve chosen to show in the women’s market. We’ve never really pushed for the men’s.

John: In terms of retail strategies for each gender, that’s something we’ve explored more recently. When we did our first lookbook, we showed each style on a girl and a guy. Part of our thinking there was, if a guy doesn’t see it on a guy, it might not read as being easily translatable. The same can be true for girls. But at that point, we weren’t thinking as much about what editors had in mind as they combed through our collections. They don’t always look at our collection through that “gender neutral” lens; they might be more open-minded than the average client, but they still see looks as being for a guy or for a girl. So we’ve taken that into account.

But it does seem like with recent collections, you’ve make a conscious decision to focus on womenswear. How deliberate was that shift in presentation? How have you altered your presentation to accommodate that market?

John: I know what you mean, but as far as I'm concerned, even with these new collections, we really haven’t changed. For one thing, even as early as our second season, we had clearly gendered pieces—when we first introduced swimwear, for instance, we had women’s bikinis and men’s speedos. But also, like Scott said, women’s has always been the core of our business—it’s just that now we’re focusing on it more. Ambisexual is our brand DNA; our core has always been gender obsolescence, so it’s not something we have to do intentionally. So we can evolve by building on that core with every new season, introducing new ideas that layer on top of it.

Scott: Our brand philosophy is about confidence. A cut’s going to be sexy when the person feels comfortable in it. That’s always mattered most to us, and that will never change. 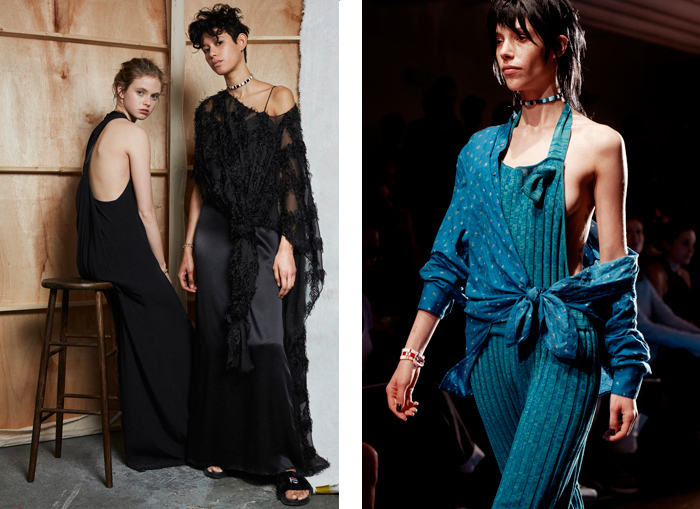 Speaking more broadly, has being continually associated with the “gender fluid movement” been beneficial? Has it been a hindrance?

Scott: It’s been beneficial, for sure. First, it still goes towards the whole principle of what we do. But also, we feel like, we have our relationships, but who wants to write about another women's ready to wear brand? So more than anything, it’s about seeing which magazines are actually willing or capable to write about these ideas surrounding gender, and do it in a meaningful way.

John: Looking back to when we launched the brand, there's no way we would have gotten the type of attention we did if we’d been perceived as just another womenswear brand. Being written about as an ambisexual label gave us visibility and allowed us to set up a dialogue. It put us in a kind of unique position: as an American brand, to set out and actually be positioned as a luxury brand, I think, was really against the grain at the time.

Given how prominent the topic of gendered fashion has become in recent years, though, do you feel like you deserve more credit for having been ahead of the curve?

Scott: We do believe we were some of the pioneers of it. But our brand has evolved since then. We’re really not relying on that right now. So no, we don’t need credit. We’re just focused on developing our business as honestly as we can.