Planetary Folklore: On Victor Vasarely and the Strange Aging of Op Art 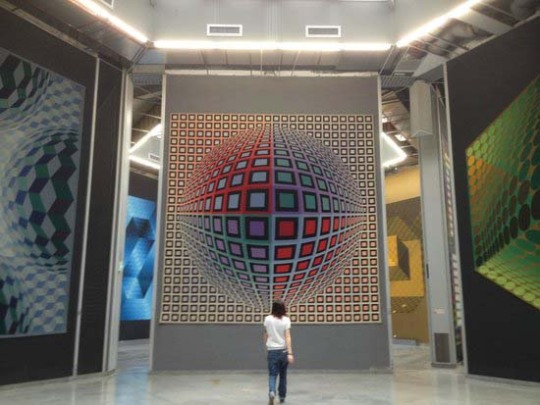 To say Op Art hasn’t aged well would be true but not quite right. Though time has seen the style relegated to a historical footnote, its flickering optics the stuff of smoke-suffused dorm rooms and Magic Eye posters, it’s easy to forget that in its moment, Op was at once a logical extension of progressive art narratives and a genuine social phenomenon, reaching beyond high art confines to galvanize consumer fields of fashion, product design and advertising. Synonymous with Swinging London and foreshadowing the mind-blown motifs of the psychedelic era, Op was pop before Pop came to pass; what it lacked even then in critical approval, it made up for in cultural impact. 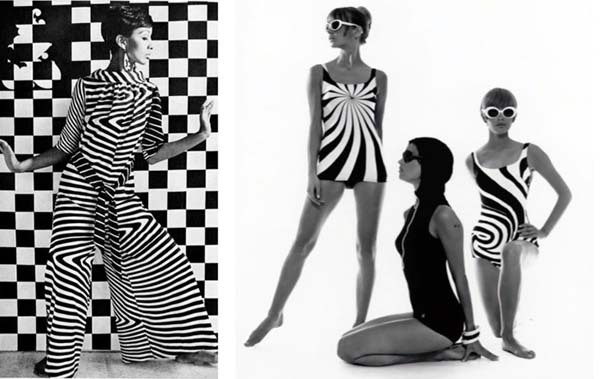 Still, for all its popularity, Op’s moment was short-lived, peaking with MoMA’s blockbuster 1965 survey “The Responsive Eye” before being eclipsed in galleries by Pop and Minimalism, its mainstream presence soon descending into kitsch. Of the artists included in that breakout show, a choice few succeeded in transcending the affiliation, their work afforded thoughtful coverage even as Op fell out of fashion (see: Bridget Riley). Others weren’t so fortunate. Case in point: Victor Vasarely (1906-1997), the style’s prolific main progenitor, whose work evolved even as its prominence diminished, his name tightly anchored to the movement he’d inspired.

But of course, art’s reception goes in cycles, and recent years have seen a renewed interest in Vasarely, who is currently the subject of an illuminating survey at Centre Pompidou. “Vasarely: Sharing Forms” presents the artist’s sixty-year career as a sequence of distinct phases, situating his signature Op canvases amid sculptures, multiples, graphic designs and architectural integrations. In tracing Vasarely’s path from Parisian ad man to abstract pioneer, the exhibition reveals an artist whose ambitions went beyond mere illusion, the scope and significance of his output each greater than tends to be credited.

Vasarely (born Győző Vásárhelyi) was raised in Pécs, Hungary, and studied in Budapest at the Mühely Academy (Bauhaus’ Hungarian counterpart) before moving to Paris in 1930. There, he found work at a series of ad agencies, where his commercial designs often conflated pictorial representation and overlaid abstract patterns. By 1944, Vasarely had turned his focus to painting full-time, soon establishing the theories and technical strategies that would occupy him for the next half-century. In shifting the scope of his practice, Vasarely took his cues from a range of avant-garde projects – chief among them, the applied arts of the Bauhaus, the visual simultaneity of Cubism, the politicized aesthetics of Constructivism, and the principles of Kinetic Art, which found artists like Alexander Calder and Naum Gabo making works that were literally moving, incorporating elements of space and time. By the 1950s, Vasarely had abandoned representation in favor of geometric abstractions that generated sensations of depth, perspective and movement through precise arrangements of line, color and shape. With early black-and-white canvases like Oet Oet (1955) and Vega (1957), we see Vasarely’s signature strategies firmly in place: high contrast, dense patterning, axonometric perspectives, destabilized figure-ground relationships. Over time, he would expand his technique incrementally, replacing his achromatic palettes with vibrant tones, experimenting with spherical distortion and color theory, eventually branching out into standalone sculptures and architectural installations. 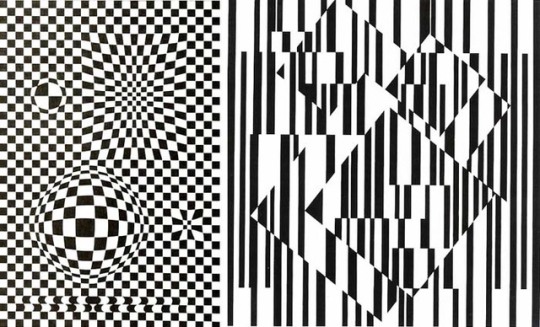 Like the Op artists who followed him, Vasarely’s work was centered as much in science as aesthetics: extending an artistic concern with optical perception dating back to the Renaissance, he applied insights taken from published studies on the neurological and cognitive responses of the eye, gradually building an abstract vocabulary which, he said, might represent “worlds which have hitherto eluded investigation by the senses: the worlds of biochemistry, of waves, of magnetic fields, of relativity.” This last part is important. Alongside seminal canvases by Rodchenko and Duchamp, Op was painting’s great contribution to Kinetic Art, translating movement and time to static designs. But where a work like Nude Descending A Staircase No. 2 (1912) saw its range of motion unfolding on a single plane, Op compositions shifted according to one’s vantage point, each design containing a potentially infinite range of readings. Crucially, this multiplicity was entirely dependent on the viewer’s movement, the work’s content literally a matter of audience perspective. Its retinal effects virtual but visceral, Op’s true subject became the act of looking itself, the beholder now a decisive agent in its fulfillment.

But while Vasarely may have shared his peers’ interests in theory-bound, science-based abstraction, he diverged from many of them in his views surrounding its use. True to his post-Bauhaus training (and much to the chagrin of critics), Vasarely’s practice always fell squarely between fine and applied arts, embracing decoration and function in equal measure. Believing art should serve a purpose, he saw no conflict in supplementing his gallery work with commercial projects, applying his signature style to everything from corporate logos to the design and adornment of architectural spaces – nowhere more visibly than in the establishment of his namesake foundation. Set in Aix-en-Provence, France (Cézanne’s birthplace), and inaugurated in 1976, the Vasarely Foundation’s sprawling compound is comprised of sixteen hexagons forming seven “cells,” each dedicated to a particular era and featuring monumental, site-specific installations. Characteristically, the resulting space is an artwork in itself, with Vasarely’s carefully considered layout functioning as a kind of kinetic sculpture, offering visitors a sequence of large-scale optical illusions as they make their way through the galleries. 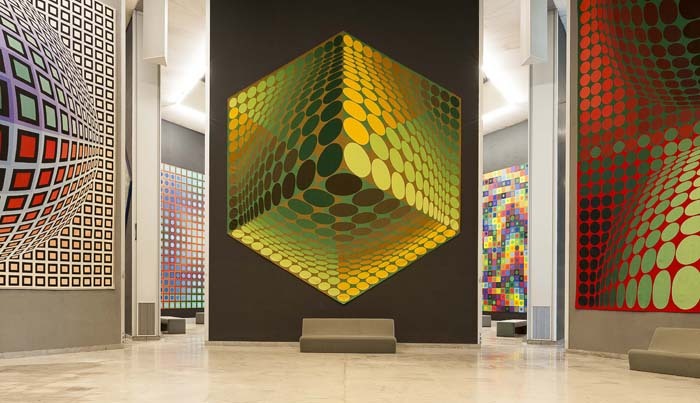 For years, the Vasarely Foundation was the best (and at times sole) option for those looking to immerse themselves in the artist’s varied output—but thankfully, with Vasarely now enjoying a moment of reappraisal, audiences needn’t travel to Southern France to see for themselves. Casual viewers will always find pleasure in the work’s funhouse optics, of course, but for a more dedicated audience, the promise of a show like “Sharing Forms” is two-fold: first, that it might provide a deeper understanding of the artist’s project by clarifying (or, indeed, complicating) our perspective; second, that in the act of rediscovery, we might also confirm the work’s relevance, connecting past strategies to present concerns. In this case, both prove to be true. To the former: Though realized to dazzling effect in his best-known canvases, it’s fascinating to see Vasarely developing his techniques as early as the mid-‘30s, with semi-figurative works like Zèbres (1937) and Tigres (1938) turning patterned pelage into eye-popping design. Equally intriguing (if mainly for context) are a series of works created between 1947-51 in which Vasarely drew inspiration from the details of real-world locales: the cracked white tiles of the Paris subway, the pebbled beaches of the French coastline, the effects of shadows and sun on buildings in summer.

But although he went on to translate his approach to various modes and media over the years, what’s perhaps most striking in viewing Vasarely’s work altogether is the realization that a single underlying precept had guided him each step of the way: a continued faith in the radical potential of accessibility. As a long-time admirer of Gropius and Malevich, Vasarely believed aesthetic principles had social implications; where some dismissed his approach as lightweight and impersonal, Vasarely saw his work as building towards a kind of “planetary folklore”: direct, non-exclusive, empirical. To that end, he went so far as to create the Alphabet Plastique, conceived in the early 1940s as a universal language for graphic art, comprised of simple, endlessly interchangeable compositional elements whose arrangements would be coherent to all audiences, regardless of education or background. "The art of tomorrow will be a collective treasure,” he once declared, “or it will not be art at all."

Confirming an original aim of abstract art, this ideal of universality is neatly embodied in much of the work he produced and later inspired. Op was, after all, participatory by design, activated by viewer engagement and defined by individual perceptions; rational but relative, the mode was purposefully interactive, its means open-source, its meanings open-ended. But with projects like the Alphabet Plastique, Vasarely took things a step further by devising a systematic approach that could be employed effectively by artists and non-artists alike. Using intuitive combinations and arrangements to compose new works ad infinitum, the approach was literally codified – which is to say, programmable. (An early proponent of cybernetics, Vasarely went so far in his later years as to develop a computer program for designing new works, using simple parameters to create endless remixes which could then be fabricated by his assistants.) For an artist already preoccupied with user experience, this was a large but logical ambition: a visual culture centered in accessibility, enabled by science and available to all.

That Vasarely’s ideas here seem to anticipate the digital methods of artmaking and distribution that would emerge at the end of the 20th century speaks, ultimately, to the prescience of his vision. Obvious connections can be drawn to computer-based art from the 1960s on, with Op’s data-driven merging of aesthetics, mathematics and science serving as precursor to the software-enabled possibilities of the Internet age. But today, as much as in process and appearance, Op’s resonance may lie in its willingness to engage the world around it. As successful as Vasarely and his peers were at integrating a fine art mode into mainstream society, what’s perhaps more instructive is their eagerness to imbue fine art with the technological advancements and social theories driving change in broader culture. At best, art tends not to suggest the state of society so much as reflect it; today, in a moment defined by our access to/excess of information, there’s something edifying (and, perhaps, reassuring) in acknowledging artists who found fresh opportunity in the disorienting progress of technology. 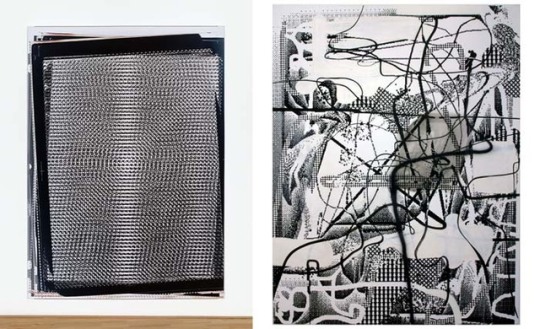 Indeed, just as Vasarely’s work enjoys renewed critical interest, so has Op’s influence been felt in a range of recent offerings, from gallery walls to fashion runways: the patterns and presentation of Off-White’s Women’s Fall/Winter 2019 collection, which finds Virgil Abloh adopting the checkerboard patterns of Vasarely’s achromatic grids; the dense, vectorized paintings and environments of Avery Singer; the checkered grids grounding the fragmented compositions of Albert Oehlen; the "Vector Weave" prints and lush, layered collages of Travess Smalley. That contemporary authors have found fertile ground in this supposedly outmoded style speaks, on one level, to the cyclical nature of influence: as circumstances change, artists have long looked to the more unfashionable corners of art history for inspiration, their neglected strategies appearing newly fresh and ripe for appropriation. It may also suggest, however, that as thoroughly as Vasarely and his peers seemed to be “of their time,” they may have been ahead of it as well.