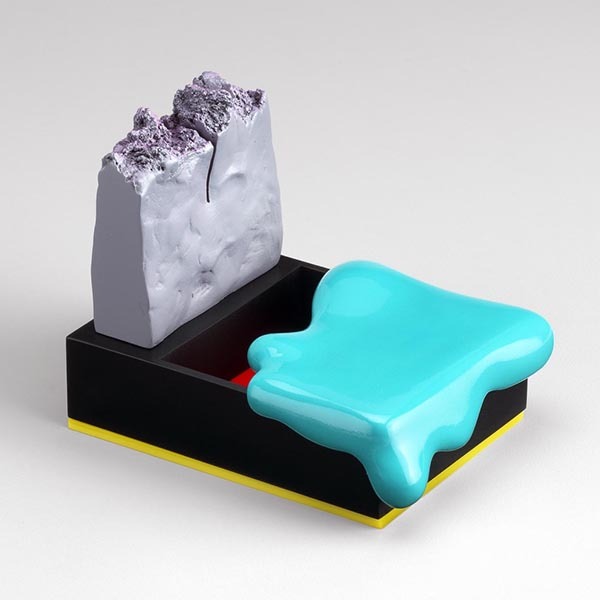 
Ambling through Matthew Marks’ space in Manhattan this spring, you would overhear fragments like these floating through the makeshift rooms, whispered by fellow visitors making sense of the items on view. The objects themselves gave little away: twenty-six small ceramic sculptures, each an abstract composite of sections, materials, textures and hues; encased under plexiglass like specimens on display, the works seemed a species unto themselves, as exotic and strange as any foreign flora or fauna. Consulting wall labels for clues, one found only long lists of mixed mediums and a sequence of non-sequitur titles (Urinetrouble, Lamb Shank Redemption), punny handles amounting to little more than a wink, a joke, a willful non-starter. A fun but confounding exchange, then: a set of conversation pieces with secrets held close, offering much to take in but little to take away beyond one’s own associations, expressed in simile. 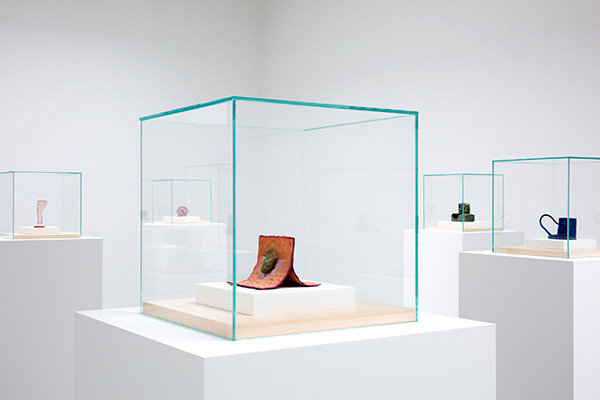 In this sense, the show on view—“Getting to No,” a collection of new works by the California-based artist Ron Nagle—was typical: over the course of six decades, Nagle has built his name dreaming up vibrant and technically dazzling clay works whose bizarre, vaguely biomorphic forms prove resistant both to repeated motifs and easy readings. (That the exhibition’s title reads “No” rather than “Know” is instructive.) Nagle developed his craft while apprenticing under Peter Voulkos, who similarly broadened ceramics’ scope by eschewing function in favor of more “painterly” aspirations in scale, surface, and concept. Showing alongside other unorthodox West Coast sculptors like Ken Price and John Mason, Nagle became quickly associated with the California Clay Movement—but despite his pedigree, he has remained, in his own estimation, permanently “out of step”: drawing on influences ranging from Japanese Momoyama ceramics and Cy Twombly’s sculpture to Krazy Kat cartoons and California hot rod culture, his practice has evolved intuitively, at equal remove from inherited traditions and modern trends.

Nagle’s effect is, above all, sensual: in medium, process and palette alike, he offsets vivid, even garish treatments with the subtleties afforded by lush layering and careful proportion. Though grounded in hand-modeled clay, each work is composed of multiple parts and bears its own unique blend of techniques: slip-casting, repeated firings, modified glazings, integrating “non-art” materials like polyurethane and epoxy resin. In treatment, it’s all about texture: sleek, shiny finishes glide over craggy terrains; surfaces clash and converge at will, one smooth, another pebbled, one porous, the other slick. Then there’s the color: a confluence of poppy pastels, rich hues and grody petinas, achieved through combinations of porcelain finish and airbrushed auto paint. Fantastic in each sense of the word, the results are variably (and often simultaneously) organic and architectural, elegant and grotesque, delicate and coarse, erotic and humorous, intimate and impenetrable. That such complex viewing experiences might be contained in objects the size of one’s palm, however, speaks to Nagle’s true talent: though rarely exceeding six inches in any direction, his works carry an undeniable presence, inviting and rewarding closer confrontations; displayed so as to be viewed from multiple angles, he centers the role of relative perception in gauging a work’s figurative weight. (This is an important point with Nagle: “size” deals with physical dimensions; “scale” speaks to visual effect.) Minimal in bulk but monumental in impact, Nagle’s pieces offer a welcome counterpoint to the “bigger is better” ethos that so many artists and institutions have embraced (and perhaps suffered from) in recent years.

Today, at eighty years old, Nagle is having a moment: on top of the Matthew Marks exhibition, he recently mounted his debut solo show in Germany (“Euphoric Recall” at the Fridericianum in Kassel), which will soon be followed by another milestone: set for release in January 2020, Ron Nagle: Handsome Drifter (University of California, Berkeley Art Museum/Pacific Film Archive) is the first institutional volume spanning the artist’s career, featuring lush documentation alongside essays by curator Apsara DiQuinzio and critic/theorist Jan Verwoert. Per pre-release press, the monograph aims for a delicate balance: to be definitive without attempting to define, exploring a life’s work without presuming to explain it. To speak in absolutes would, after all, seem fruitless, given Nagle’s approach: “I’m always creating a hybrid,” he has said. “You can’t quite put your finger on it.”


Originally published in the F/W 2019 issue of KALEIDOSCOPE