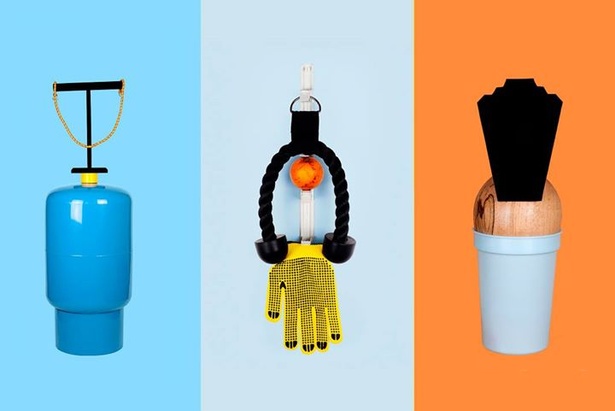 “To say that man-made things are desirable is redundant," George Kubler writes, "because man’s native inertia is overcome only by desire, and nothing gets made unless it is desirable…If we depart from use alone, all useless things are overlooked, but if we take the desirableness of things as our point of departure, useful objects are properly seen as things we value more or less dearly.” It's an apt frame of reference in looking at the most recent set of photographs by Toronto-based artist Jimmy Limit, whose work is similarly invested in exploring the gap between objects’ intended functions and their inherent, perhaps unrecognized, and often inadvertent aesthetic value.

For this latest series, Limit gathered and assembled a variety of humble materials – hardware miscellany, fruits, plants, ceramics – into makeshift sculptures which he shot against colored backdrops and dismantled immediately thereafter. In choosing which objects to combine, his concerns were purely formal; setting aside their practical functions, Limit encourages the viewer to consider these items, perhaps for the first time, on entirely visual terms.

While the resulting images deftly appropriate the exacting process and slick aesthetic of stock photography, their presentation as works of art reinforces two critical points: First, that an image’s meaning(s) depend entirely on the context in which it’s shown, a notion as central to art theory as it is to stock imagery; and second, that depictions of artworks often share with commercial photography a common basic function – namely, that of making their subjects appear desirable – and so similarly demonstrate that even in object-based economies, images play a crucial role in generating a consumer impulse. (It’s worth noting that Limit’s photos were ultimately released as Spring/Summer 2012, an artist’s book which, in mimicking the look and feel of a ULINE catalog, further mines the relationship between object and corresponding image, and how feelings of desire are cultivated through unassuming – but deliberate – methods of representation.)

At once stylish, smart, and subtly provocative, Limit’s work lends itself to any number of timely conversations: among them, the reemergence of studio practices and sculptural materiality in art photography; the adoption of “neutral” still-life/stock aesthetics as response to the context-canceling effects of online circulation; and the increasing tendency for images to serve as our primary (and oftentimes sole) means of encountering physical objects. But perhaps more than anything, it also reminds us that in commercial and creative endeavors alike, what matters most is often not what you’re selling, but how you choose to sell it.