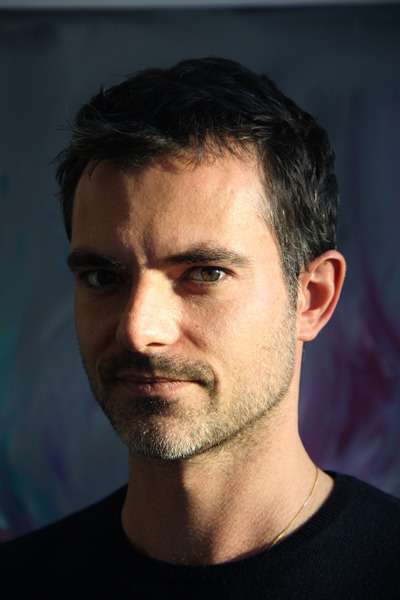 Though based in Brussels, Jean-Baptiste Bernadet (b. 1978, Paris) has spent much of the past few years living and working in the US. His most recent stint in the States began in July of this year, when he returned to New York City as part of the Triangle Arts Association’s six-month artist residency program. It’s been a productive time for Jean-Baptiste: in addition to working on a book with writer John D’Agata (About a Mountain, to be published in the new year by Karma NYC) and solidifying plans for a 2013 solo exhibition in Marfa, Texas, he’s completed a slew of new works of varying sizes, styles, and visual strategies.

The quantity and diversity of this new work reflect a studio practice which is at once restless and open-ended – the artist works on numerous paintings simultaneously, working in various formats, adopting different techniques, and embracing new discoveries as they arise. In assessing this output, one finds little in the way of direct lines: rather than achieving a calculated end, Jean-Baptiste’s process is one of gradually finding the image through a succession of erasures, overlappings, negations, and revisions. While the results aim to create a genuine pictorial experience, displaying as they do Jean-Baptiste’s sensitivity to color interaction, application, and composition, each completed canvas still represents, as he himself puts it, “a lot of lost energy” – which is to say, intensive (and often extensive) periods of experimentation, deliberation, rejection, and modification.

While the paintings do contain within them this narrative of self-questioning and hesitation, it should be stressed that the work is never about these things. Taken as a whole, his work should be seen rather as evidence of an individual painter coming to terms with both the material possibilities and the inherited baggage of his chosen medium; it questions what it is to be committed fully to the project of painting, but not to its mythology.

Did you arrive at any new themes or ideas over the course of your residency?

I do think I developed some new ways of thinking about my work. That was thanks in part to the length of the residency, but also because I didn’t really have any exhibitions or set goals to work towards for it. So I was able to explore, and may have pushed my work into more uncomfortable territories. My painting did change, I think, but I always need time to figure out if and how the new directions will be kept. With residencies, I usually need to go back later, bring what I’ve made into my Brussels studio, and compare and mix them with my older existing paintings.

What it is that makes these new directions uncomfortable?

Bad taste is an uncomfortable territory. Readable body action visible in the painting is uncomfortable, too. I’ve tried in the past years to play with these things. Of course, my paintings are hand made, so there is this expressivity in them you can’t avoid - and I didn’t necessarily want to avoid it - but it was always more or less hidden behind a foggy aspect, or behind a last layer that contradicts the previous layers, or these gestures were duplicated, or they became impossible to distinguish from the background. Some of these new paintings don’t do that. They are more “readable,” you can really see how they were made, where they began and where they ended. I feel more “exposed”, more physically (and visibly) involved than in my other works. And I feel this is a pleasing thing, but very dangerous too, since I am very suspicious of any kind of heroism and drama in my work. 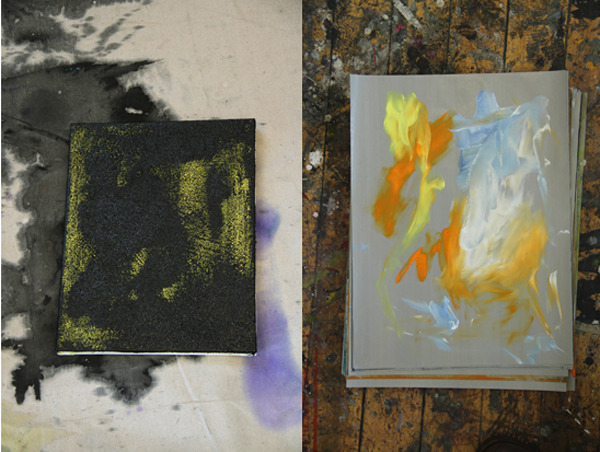 You mentioned that earlier - that for you, part of maturing as a painter was gradually rejecting the myths of mid-20th century painting - heroic gestures and scales, bald earnestness, the singular authority of the artist, etc.

I don’t reject the tools or signs of modernism - it’s more the notions of power, authority, and autonomy that became so stereotypical of the Abstract Expressionists. I find that side of it strange, even coarse. Let me put it this way: something I think you find in literature is that there are two kinds of readers - those interested in the narrative, and those interested in the writing style. I’m an avid reader – mainly novels, not much art theory – and I’m more interested in the style. The story doesn’t matter so much as long as it’s well written, which for me means that the activity of writing itself is perceptible, that the printed object you have in your hands is conscious of itself. That’s when the language is a singular voice and not just a convention. That’s what I want in my paintings.

One of the interesting things about this recent work is how you translate your ideas into canvases of various sizes. Does working in different formats require any changes in approach?

This is something I realized only once they were done, but I have a feeling there are actually three groups of paintings here, as there are three different sizes, all made with the same brushes and materials. The smaller ones lean toward becoming a sort of object-painting - there is often more thickness and perhaps volume to them, so I see them almost as sculptures. The medium sized paintings are more in the classical window / mirror / screen vein - they are probably the most landscape-y of my paintings. And finally, the larger ones are more like backgrounds, or stage sets, or cinema screens. They are often more “empty” than the other ones. But (and this is something quite new, something that’s only happened here in the last few months) these three categories tend to melt as, for example, I began making the largest ones look almost the same as the smallest ones, so the distinctions are not that obvious anymore. 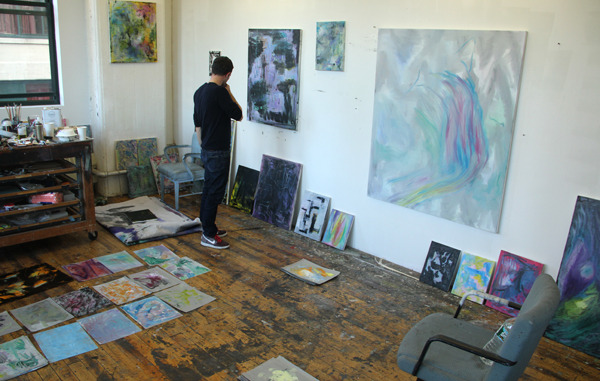 So then how do you decide which works constitute a final series? Are they grouped by timeframe? By concept? By technique?

It’s mostly a random process, quite similar to the making of the paintings themselves. I often try to remake my own paintings, but most of the time it doesn’t work, and it’s just a way to start a new painting. Sometimes, though, it does work, and certain visual aspects are repeated, so if I’m happy with a title I’ve found for a painting, I use the same title for paintings that look similar. Then you have a series.  Recently, I’ve tried working with a series in mind – trying from the beginning to do exactly the same kind of things on several paintings at the same time - but when I do that, it just feels to me like one bigger painting divided into multiple smaller paintings, not really a “series.”

Do you start your paintings with a sense of how you want them to look when they’re finished?

I would say that I start paintings with a vague idea of what I want - whether it’s based on previous paintings I’ve made or something I’ve just seen in a museum, in the subway, or on the street - but this idea, this first layer, is almost never present in the final work. It does happen, and actually has been happening more and more frequently (especially in the 5 W’s and 1 H series I showed in Rotterdam last year), but I can’t say it’s my usual way of doing things. Most of the time, I have to add layers and layers and layers before I’m satisfied. I generally think my work involves removing, hiding, and covering things more than it does building, composing, or going directly somewhere. 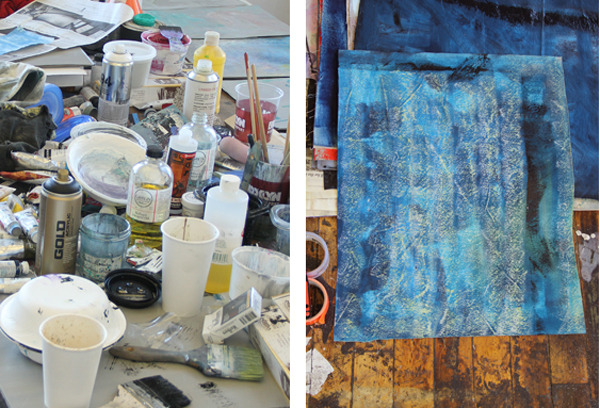 We've discussed elsewhere how you often have trouble finishing the works - that there’s generally a lot of indecision and hesitation, and an extended period of revision. Why do you think that is? Do you think it’s reflected in the paintings themselves?

There’s a lot of lost energy in my work. I don’t have any program or preconceived ideas when I’m working, so I have to let my body restitute the gestures it’s learned from practice, in an almost blind and brainless way. Then I rework it. Some of the first energetic gestures remain, but they were just the “good” ones. All the other ones are erased, canceled out. In the end, I think a painting is done when the last action taken with the painting makes everything holds together. And beyond being finished, my best ones are the paintings I have the feeling someone else has made - to put it differently, the paintings that I could not make twice.  I think what I always liked in others’ paintings, whether they’re from the Renaissance, the 19th century, or today, is some element of fragility or provisionality. I like when that decisive instant that transformed failure into success becomes visible, even if what remains is mysterious. I want the viewer to discover and decipher the paintings in exactly the same way I did while making it. To do that, I have to present questions and let these questions stay up in the air. What I want to make people feel is the same thing they feel when they question themselves about life and death, love, or the existence of God, etc. I’m not interested in showing my balls or imposing something on the viewer. I’m not pretending I’m a Master or a visionary. I’m just searching for something, and I think that’s what the viewer and I have in common, in art as in life. That’s how we are fragile, humans, and humanists. 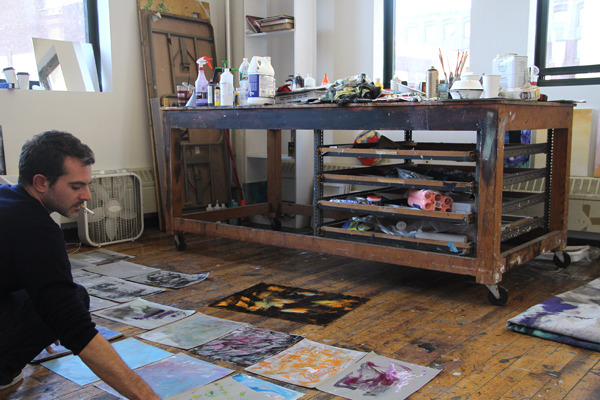