Caleb Considine deals in filters and fragments, his work subtle in treatment but slippery in content. With “Cancelled,” his first solo show at Galerie Buchholz, the New York-based painter continues to pursue an ideal of “muteness” that may well serve as overall thesis for his practice. Though drawn from live observation and precisely rendered, the resulting works retain a willful reticence, the artist dislocating content through active gestures of abbreviation, interruption and restraint.


Can you speak to the title of the exhibition? Is it an outside reference, or suggestive of a broader theme among the works on view?

Years ago, Ringling Brothers Circus came to New York and animal rights activists made large black-and-white official-looking stickers that just said “Cancelled,” which they pasted over the signs advertising the circus—just classic agit prop. This has no relation to my show and isn't a reference, but I've never titled a show before and thought it was a good stand-in.

In relation to previous shows, is there anything about “Cancelled” that for you feels like a notable point of departure? Is it more of a refining of ideas or methods you’ve been developing over the past few years?

I work really slowly, and I think that's how the work develops from show to show too, so it’s hard for me to say yet. One of the paintings in this show was actually made outside, on an above-ground train platform—that was new for me.

With previous exhibitions, it’s felt as if you’ve deliberately collected and showed works in a way that resisted legible through-lines in style or subject. Is the same true here? Of the works on view, is there any particular piece that stands apart or somehow disrupts a linear reading?

This show doesn't have an overarching theme apart from my practice and an emphasis on process, like before. The Samantha Power painting stands out formally; the devil statuette I bought on eBay and placed in front of a printout of Power at the UN. Montaging a media image into a painting isn't something I normally do. The title is derived from her tome advocating humanitarian intervention in prevention of genocide. For the past eight years under Obama, she was the moral face of American foreign policy, so using this image of her and casting her as a devil seemed fair play to me. There’s a pleasure in simple inversions. Of the works on view, I’ve only seen a single reproduced image—a still life you’ve chosen as an introduction to the exhibition. Would you mind walking us through that painting, not only in terms of the elements portrayed, but also to the ideas that informed it?

That painting I started first and finished early, so it was available ahead of time to be used on the card. It's a collection of things that had been hanging around my studio: An actual pot leaf gilded and laminated that’s an artwork of sorts by a friend. My baby teeth, though I don't really know why I had them in my studio. A leopard-spotted fish pelt from Iceland, given to me by my mother, who is an artist whose work has been focused on Iceland for the past few years. Underneath is a tray of shellacked beef jerky that was to be part of an artwork by another good friend, but it started to mold over. Taken together, they are ciphers for a banal exoticism, arranged but also haphazard, which I like.

Forgive the reference, but in making my way through your earlier work, I found myself thinking about Edmund Husserl’s concept of “bracketing”—the phenomenological ideal of isolating a fragment of the perceived world and suspending judgments until only direct, bare experience is left. A bit wordy, I know, but at base, it’s the suggestion that to perceive (as to produce, as to present) is an inherently filtered, disruptive process. I feel like your work might pose some similar questions.

I think so, but I've never read Husserl, so I can't really say. I guess I could give a wordy reply, though, having to do with bracketing and questioning my subjectivity. Two of the paintings in the show are explicitly political, but I don't consider myself to be a political artist or have that sort of project. I've been making my way through Gramsci's prison notebooks, and there is a line of thought on the relation of passion in politics to longer term “wars of position” that was helpful: "If the Crocean concept of passion as a moment of politics comes up against the difficulty of explaining and justifying the permanent political formations, such as the parties and still more the national armies and General Staffs, since it is impossible to conceive of a passion being organized permanently without its becoming rationality and deliberate reflection and hence no longer passion, the solution can only be found in the identification of politics and economics." The political paintings are just outbursts, "passion" as a moment that is not organized or rationalized into a position, and so in Gramsci's sense, they wouldn't really qualify as political in this sense that he was advocating. The economic realities of the art world today make this kind of rationalized position-taking a real mine field, of course. 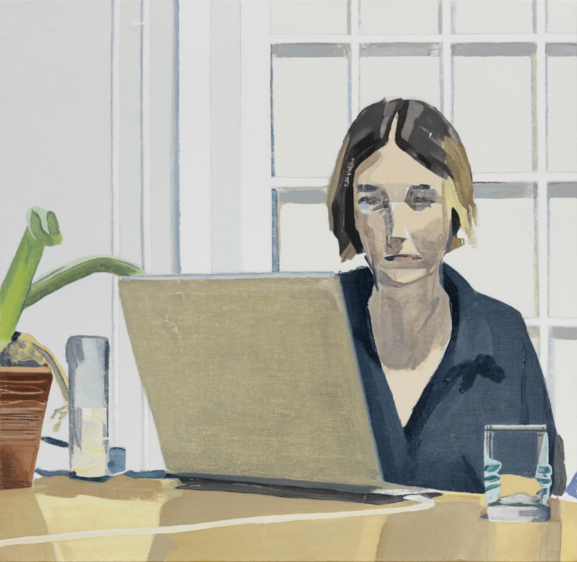 I’ve seen your work described in a number of articles as having “surrealist” tendencies—which I can sort of understand, but which I also find slightly questionable. How do you respond to that label?

Honestly, I don't really think of it as being surrealist in any meaningful way.

To date, you’ve largely favored small-format canvases, which I assume has been a purposeful (if not practical) strategy.

It's basically practical, but I guess the fact that it would seem strange and difficult to me to make a painting that I can't hold in my lap as I work maybe reflects how I interact with them physically.

Central to your work the past few years has been an active refusal of the elements that typically make representational artworks comfortable: the suggestion of narrative, the allowance for projection, the potential for allegory, the aura of intimacy. In denying these points of entry, is it still possible for the audience to have an intimate experience (however defined) in viewing your work?

Yeah, I mean, I don't know about intimate, but I can't and don't try to hide all the effort and struggle I put into them. Sometimes to me they can look rough in this way that reflects how there’s a crude sort of reverse engineering of classical techniques going on. I like that that’s apparent in the surface.

It’s an interesting idea: the notion that gratification might come specifically from being denied conventional means of assigning value. Conscious or not, would you imagine this being part of your work’s appeal?

I'm not sure. But I do think conventional means of assigning value are at play in the paintings.

For all of their apparent reticence, your paintings often strikes me as funny, almost camp. Am I off-base, or is humor an overlooked element in your work?

No, I know what you mean. For me, they are not camp at all. I think that has often just become a default mode of apologizing for painting today (especially figurative), but I definitely think there are funny moments.

Your studio process entails long, isolated hours focused on a given task—observed renderings, live sittings and so on. I wonder what kind of environment or daily practice lends itself to that kind of prolonged absorption. For instance, I understand you often listen to news and podcasts while working, which has inspired leads for found source materials (the “No-Shank” pen comes to mind). Were any of the pieces on view at Buchholz similarly inspired?

Yeah, I sort of work all the time and listen to a lot of news and also audiobooks—first a ton of sci-fi, recently crime thrillers, whatever is plot-driven and not too serious. Nothing audio sparked any of these ideas for paintings. I think of the prolonged hours as a kind of editing process writ large: I have plenty of time to decide a certain idea is not worthwhile and should be scrapped.

Generally speaking, does your satisfaction tend to lie more in the conceiving, producing, or completion of the work?

I get satisfaction and pleasure from caring for something. My mother is a painter and my father a conservator of decorative arts and sculpture trained in furniture making, and they instilled this value in me.

Your studio practice seems to thrive on investment, effort, endurance. To what extent might you ask the same endurance, the same kind of absorption, of your audience?

I don't think I demand anything of an audience. A lot of people are not so interested in this kind of painting, and that's totally fine, of course.

Do you think of the work as being “personal”?

Yes, but it's tricky, because this really is a game of projection. Even the most austere conceptualist will reveal a lot of personality upon scrutiny; I just think the question is when this is interesting or just anecdotal. In that context, I'd rather not try and guide anyone.

In an ideal two-person show, with whom might your work be paired? What kind of insight might their output shed on your own?

I'm not so good at thinking about curating and things like this, so I’m just gonna say Max Hooper-Schneider, since he's my oldest/closest friend and we learned how to make art together.