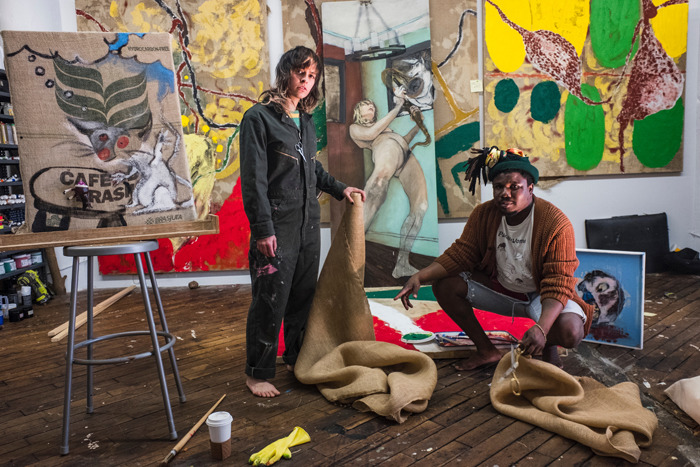 This September, you’ll be presenting a solo show at Sadie Coles HQ: the first in a four-chapter series tracking the imagined life stages of Marcus Garvey.

Right. This first chapter is Garvey being born into the world—not literally, in terms of his biography, but metaphorically. It’s a reimagining. The work does have art historical references, but reaches into different parts of culture as well—like reggae, where women are usually referenced as Mother Nature. Bob Marley’s Uprising, flowers, etc.

What drew you to Garvey as a subject?

He’s the father of Pan-Africanism, part of the first wave of Caribbean immigrants to the UK and America, and I was thinking about how that wave, and those that followed it, were responsible for me being in Brooklyn now. But I’ve been making work about him for years. There’s a community garden next to my stepparents’ house in Flatbush with a mural of him. I remember being there, thinking, “Man, I wonder if Marcus Garvey liked flowers?” So I went home and made a painting. Then I went back and did it again. I just kept going back, spending all this time with this imagery, even after I went to London for grad school. It kept developing, and when I was talking to Sadie about doing a show, it just felt like the right work for the space. It felt organic. 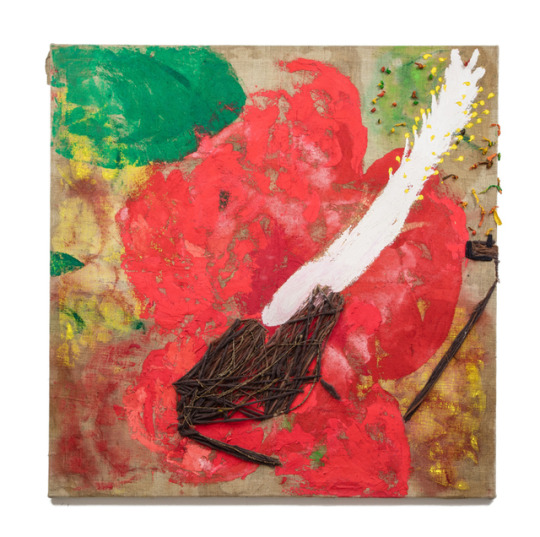 That same month, you’re mounting a two-person show at Emalin in London with your longtime friend, the artist Teresa Farrell. You’ve included her canvases in your own prior exhibitions at Emalin and MoMA PS1; will this show similarly find your works in dialogue, or are the pieces themselves collaborative?

It’s collaborative. Our relationship’s always been like that; I’ve known Teresa for years—we met at Hunter, but we’re both from Brooklyn, and had people in common way before that—and she’s done so much to make me a better artist. We have different styles, but we have very similar eyes. When we look at the canvas, we see the same thing—it’s just what we do after seeing it that’s different.

A lot of times, when you look at collaborative work, you can tell who did what. Like when Basquiat and Warhol worked together, it was obvious, because each of them was using their signature moves. With Teresa and me, we wanted to be sure you couldn’t tell who made which decisions. It wasn’t like, “You do your thing, I’ll do mine”; it was more about responding to the work, trying to give it what it needed. Making pieces with her, it’s all about what makes each other laugh. We’re just trying to get to that place where we’re both seeing the same thing.

You and Teresa share a penchant for overlaying manifold references in a single work, be they personal, historical, cultural or aesthetic. To that end, there’s a line in your manifesto that stood out to me—a quote from Kerry James Marshall: “I don’t want my work to be a zone of free association.” This seems like a stance that could be as easily aimed at your viewers—their readings, their points of entry—as to yourself as an artist, and the way you conceive, create, and even speak about your work.

People are always going to see their own thing in the paintings, which is totally cool—but the work is saying something, and that has to be recognized first. That’s what I took from Kerry James’ statement. It’s something I thought about a lot with the Garvey paintings, because I want to make sure I’m not making work that people, especially black people, can’t access. There are a lot of layers to the paintings, but not everyone has the same art historical touch points, so I make sure the work never deviates from the central ideas. Part of that is understanding what the work needs, and not letting my own ego or mood get in the way. Every work has its own tone or energy—but some of the paintings take two years to complete, and it’s not like I’m in that same mood all the time, so I have to adjust what I’m doing to fit the painting. It’s the work that decides what happens next.